skip to main | skip to sidebar

Twitter is an aggregator, but not of just content also the reaction to content.  So on the content side you can follow one space agency and if you happen to see a tweet on you TL before it spawns by, cool.  But if you follow every space agency there is a fair chance that any extra-atmospheric event of human interest will get enough aggregation as to be unavoidable.  On the reaction side something that you might normally think is irritating but doesn't rise to the level of action (a micro-aggression perhaps) has to get that pass from everyone who might feel a similar way.  But we know how micro-aggressions work, there is almost always someone for whom that today's fuckery is the last straw so this person reacts.  Since we are social primates with similar interests (as evidenced by us seeing similar things on Twitter) that one person's last straw reaction is another weight to your pile of WTF which may or may not be enough to hit your activation energy.  But again, even if it doesn't set you off, it has to once again run the gauntlet of every similar person which will usually tip someone else over into reactivity and suddenly you have a meltdown in reactor four.
Posted by Mwangangi at 9:07 PM No comments: 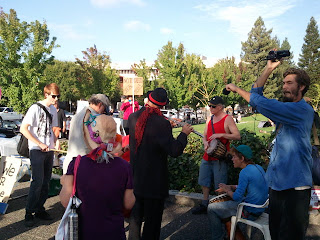 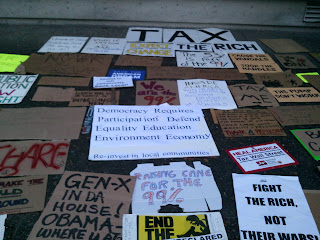 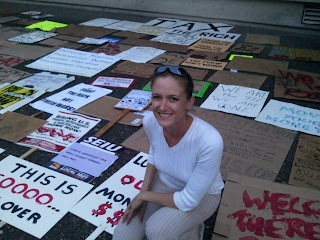 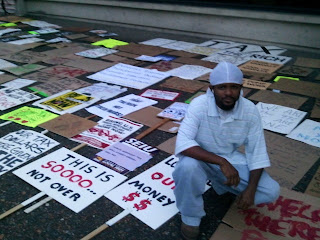 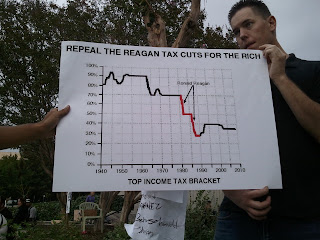 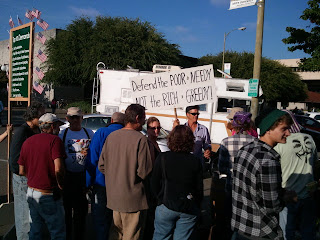 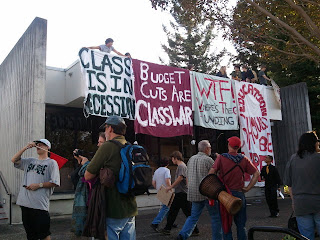 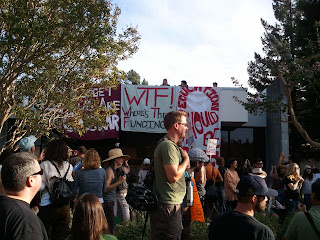 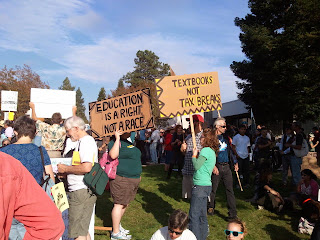 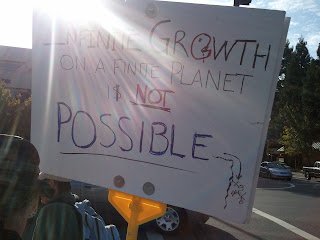 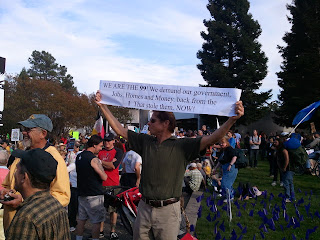 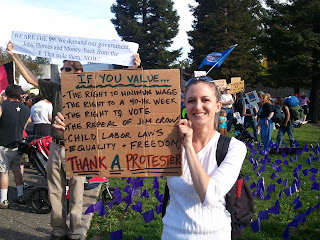 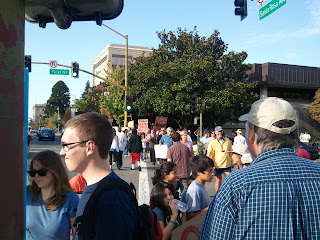 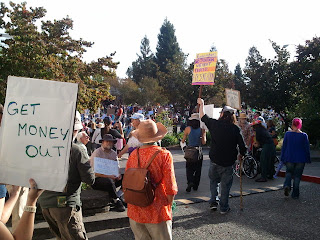 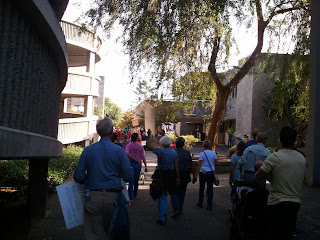 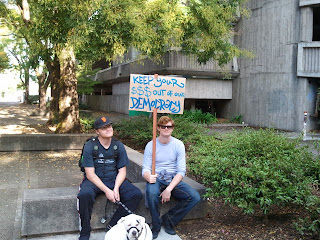 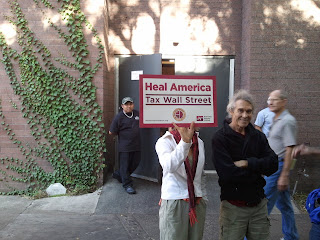 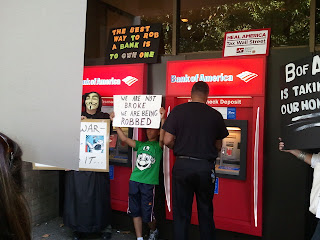 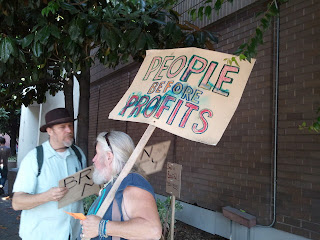 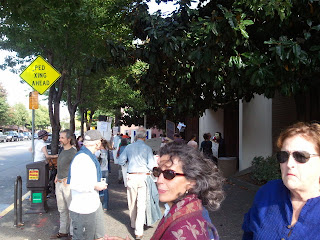 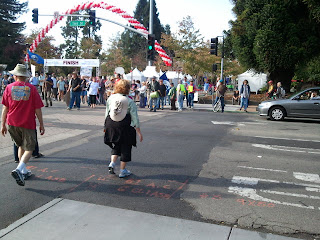 To all my happy, happy, gay compatriots [gay, gay, happy compatriots? ;) and your "nefarious" sympathizers and enablers (the latter groups are ones in which I claim membership)]. Congratulations for your perseverance through the idiocy that was/is Prop 8. Enjoy the victory. Celebrate like it's summertime (because it is... unless you live in the Southern hemisphere in which case, do it anyway because it's fun). Party like it's whatever year you like. Serve up and save up good cheer and the positive energy it generates. Because... you are going to need it.
Historically, the incumbent party loses seats in the midterm elections after a wave election (Obama kicked ass in the electoral college, thus meeting the conditions). The Republicans--
I don't mention the tea-hadists (or teabaggers, or 9-12ers, or whatever the clowns feel like calling themselves this week) here because they are functionally identical to the Republicans and a sponsored subsidiary of the same Republicans--
The Republicans already had history on their side to gain seats in Congress and thus more power to either obstruct essentially all non-foreigner killing government function, or if they gain control of the House, launch endless, wasteful, costly "investigations" in hopes of "getting" something on the Democrats.
In addition to history, the Republicans also have the pain and anxiety of a economic downswing (that was largely caused by their fiscal (and militaristic) policies) to boost enthusiasm for their lagging "brand".
You also have the buyer's remorse effect of electing someone who hasn't given you your pony RIGHT NOW! And (unfortunately) mix in the not insignificant portion of... let's just say melanin motivated voters, and you have a recipe for a hard fought election season.
But now we've touched one of the pillars of modern movement conservatism. The gay portion of the "god, guns, gays" trifecta that they've been running on for the last few generations. All that other crap was amenable to some leverage of reason (probably not much). But this is one of those supercharged emotional issues that will bring out the low information, zombie conservative voters in droves. A gay case going up to a federal circuit court (and eventually to the Supreme Court of the U.S)?! A gay case from Sissy punk California home of the San Francisco gay?! You might as well put Crystal Meth, two free all you can eat Hooters passes and a lap dance coupon in the voting booth. They'll be there (and most likely be square).
You think I had it hard the first go round, but I had the tail end of what was the shittiest presidency in the modern era, the inherent interest in a Presidential election, and the top two candidates for my party being first of a kind. Everyone had something to be excited about, everybody had something to vote FOR.
You cats are in it for real. It's a midterm election, so no presidential glamor, the aforementioned systemic hurdles, but on top of that you have to essentially fight conservative white jesus AND not alienate otherwise liberally minded voters who might have to remnants of the anti-gay rhetoric embedded deep in their personality. When I was on the campaign trail, it was still considered gauche to be blatantly racist. It's NEVER been gauche to be blatantly homophobic.
You have your work cut out for you. I'll be there to help, but got damn y'all better put on y'all grown folks drawers 'cause it's going to be fucking ridiculous out there this fall.
Posted by Mwangangi at 7:49 PM 11 comments:

I have been wondering about this in one way or another for the better part of a year. A comment on another blog caused my mind to focus on it this way today...

Why are people clamoring for a dystopia?

I can see being ideologically wound up in bringing about a utopia. Who doesn't want it to be all good? Really, the big problem with utopias is that people can't decide on what is 'good'.

Here you have a large amount of the population who believe that things are jacked up. Ask around. People will tell you about how this is wrong or that is bad.

Now ask them about doing something differently than the way it is currently done.

Sure you'll get some resistance, people generally like their habits; but when you explain the changes and the need for changes, many people accept the change and move on.

Remember these people are a part of the same group that agrees that things aren't right, and yet will strive to their utmost to preserve the status quo.

Now obviously you have some Uberman denizens of fantasyland who think: "I've got mine, screw you", or at least, "I'll get mine, so screw you". Those folks are further around the bend than I'm willing to deal with right now.

You also have the resistance to change I mentioned before, but even if those people don't like the change proposed, they come up with counter proposals and then you can reach some sort of compromise or consensus.

The remainder though, the "I'd rather die than change" people, where do they get their impetus? They don't have any counter proposals, all they have is NO.

I think it is easier to be for something than against something. What do they get out of it? Attention? Some inner joy from being miserably contrary?

My mother gets that way about certain things. You can discuss all of a subject to a certain point and she is right there with you until a certain point. Then I can see that she doesn't like where the conclusion is heading so she'll try to backpedal, but since she was right there agreeing with everything it is easy to get her to realize that she still agrees with you. Then I see her features set into a certain grim determination like she is mentally holding on for dear life. At his point we've been at every point around the conclusion and she agrees with every premise, but refuses the conclusion.

How do you even talk to people in this circumstance?

Now, what if you had some people who stood to benefit by encouraging what I can only call the denial of reality. And, those clowns aided and abetted the reality deniers, taking away even your last ditch ‘desire for social primates to conform to the standards of the group’ solution.

Now how would you get through to them?

I haven't been posting.

I've been asked why I haven't been posting. I could say it's because of work, school, and volunteering for the Obama campaign [the preceding is probably poor grammar]. Really, it is because I've been so immersed in the Obama campaign that the campaign or the campaign's subject is all that I would write about. I write about things 'kicking around in my head' and since I spend a significant portion of my free time talking with 'undecided' voters; my blog could easily turn into a 'tech support hell' type of place for low level political operatives. While that would be cathartic for me, and probably funny to some folks; that's not want I want to do.

The tone of my observations on this election season are more than adequately described by the posters and commenters at various sites.

So, if you want an approximation of my opinion; compile the themes for these sites, and you'll find a large degree of accuracy.
Posted by Mwangangi at 2:59 AM 11 comments:

Why not pile on?

Mwangangi
North Bay/California, United States
CONTAINS SARCASM WHICH HAS BEEN REPORTED TO CAUSE BEWILDERED OR HISTRIONIC REACTIONS AND, IN RARE CASES, FATALITIES, ESPECIALLY IN DEPRESSION AND IDIOCY SUFFERERS.